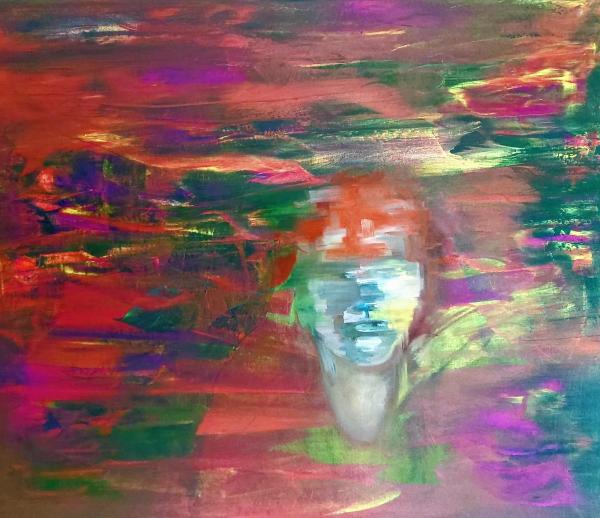 One  wild and windy night  in Wellington 2 years ago while watching TV, the images  suddenly became  pixallations and as suddenly as they appeared  they disappeared  or spluttered between the 2 states.Then the  TV would transmit normally again.The aerial was checked. The pixallations then stayed longer. They were small and large  blocks of fast  changing colors and shapes.I was so enrapt by the colours,distortions and disarrayed images of people and their faces that I rushed to grab my cellphone and started firing away at the screen.I collected 40 or so images and suddenly the tornado of disturbance stopped and the TV operated normally once again.I developed my images and started doodling on the photos.They became parties of people,and patterns, city scenes,bars,outdoor fields of colour.I at times preferred the raw images rather than my overlaid doodling.The first one to become a painting was Everything and all a segment produced on Art NZ facebook page  from my show Walk on the Wild at the Grey in Auckland.The painting is broken into small segments and motifs ,half pixallated, produced from chance and later manipulated.I kept shuffling through the rest of the others laying them down like mosiacs in random patterns.They are my weird gift from  the wind to the wire.